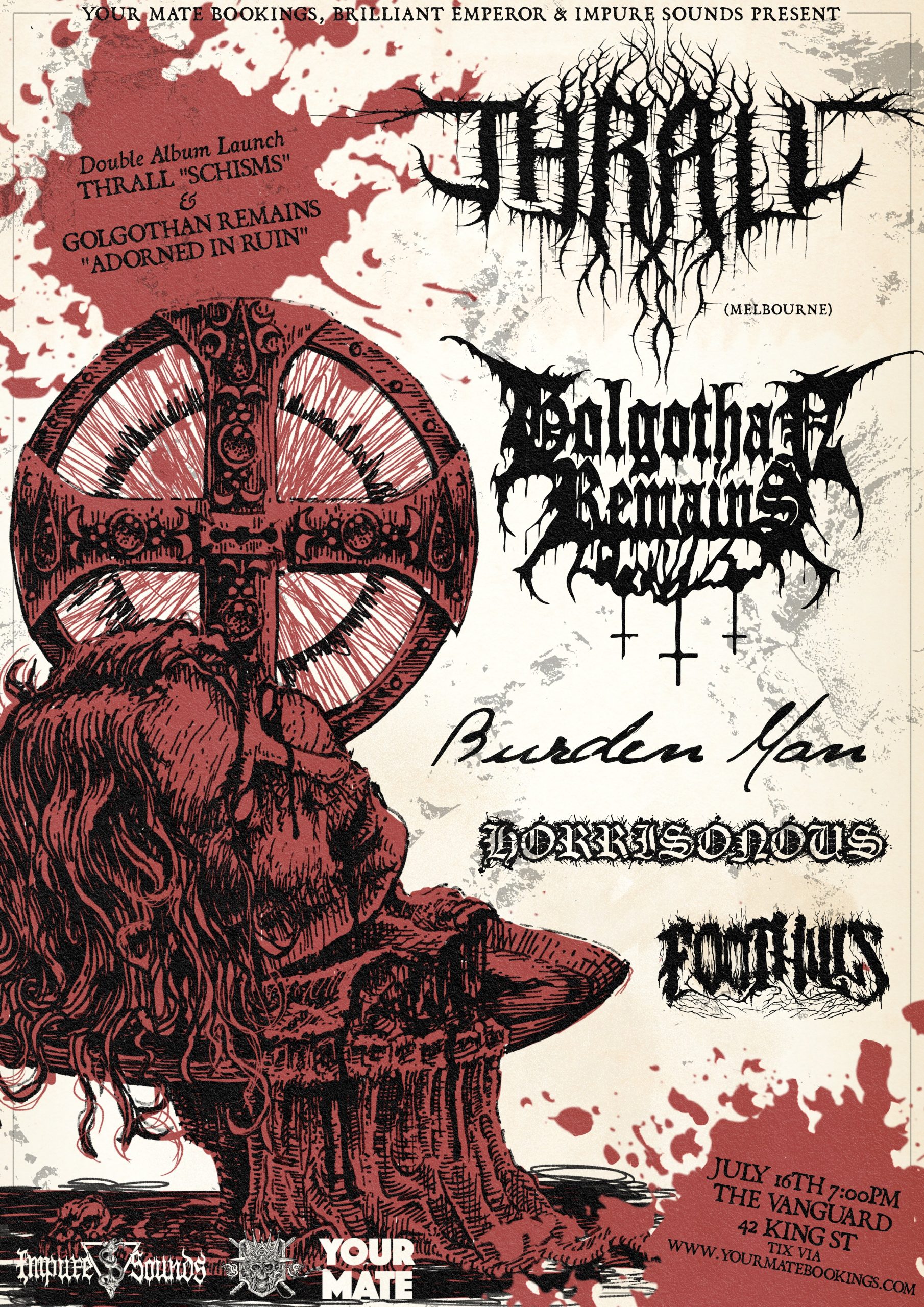 Your Mate Bookings, Brilliant Emperor and Impure Sounds present the Double album launch of THRALL (VIC) and GOLGOTHAN REMAINS at The Vanguard in Newtown on Saturday July 16th.
For the first time in a decade THRALL make their way up to Sydney to celebrate their new album “Schisms” alongside GOLGOTHAN REMAINS launching their newie “Adorned in Ruin”.
An evening of devastating noise and pummelling riffs awaits us with a strong line up of Extreme metal including local bands Burden man, Horrisonous & Foothills!
Information on all bands below:

THRALL
Melbourne-based black metal collective Thrall have been away from the recording studio since their third and critically lauded 2013 album ‘Aokigahara Jukai’. Thrall return with a renewed line-up to launch their fourth and most ambitious album to date titled ‘Schisms’. “Schisms smashes through genres on its way to total eardrum annihilation. The album sees the four-piece seamlessly weld thrash, black and doom pieces to create a blackened killdozer.” – Invisible Oranges.
FB: https://www.facebook.com/thrallofvoid

GOLGOTHAN REMAINS
Australian dark death metal horde Golgothan Remains return with their cataclysmic sophomore LP “Adorned in Ruin”, a thirty-minute weapon of absolute oblivion forged by the force of pure darkness and chaos. This new offering sees the Sydney extreme metal cult heighten and elevate their own vision of a dark future-shaping death metal to its most devastating form yet, pushing the genre beyond a state of weaponized majesty and assembling an imposing and magnificent sonic beast shrouded in destruction and otherworldly atmospheres.
FB: https://www.facebook.com/GolgothanRemains

BURDEN MAN
“Burden Man weaves relatable tales of sorrow and contemplation of the inevitable with emotionally heavy and sombre tones to create a unique style of deathly, Dark Metal. Each composition acts as a comforting, guiding hand into the frightening thoughts in your own chaotic mind”.
FB: https://www.facebook.com/BurdenMan

HORRISONOUS
Horrisonous formed in late 2015 and comprise a handful of hardened members of the local underground scene, including past or current members of such acts as Backyard Mortuary, Illimitable Dolor and Golgothan Remains.
Horrisonous deliver aural slime, decay and misery by means of the ageless brand of Death Metal that´s equally ponderous, crushing and fervent, enhanced with slithering tempos and influenced by the likes of Bolt Thrower, Asphyx, Autopsy, Death, early Paradise Lost, Celtic Frost, Carcass, Dismember and Incantation.
The band are currently working on the follow up to their 2019 debut album ‘A Culinary Cacophony’, which promises to be an even filthier and more depraved offering than the last.
FB: https://www.facebook.com/Horrisonous

FOOTHILLS
Forged in the fires of the scorched Blue Mountains of Western Sydney, Foothills combines, Death-Doom, sludge and Melodic Hardcore to exhibit something seemingly accessable whilst challenging expectations of all the genres at once.
Incorporating Dual vocals into their sound, layering textures and sonically weaving a new tapestry from the old cloth’s, Foothills fills a void.. whilst crushing to witness, listeners will always note the importance of melody.. there’s a sense of hope and optimism between otherwise belligerent riffs.