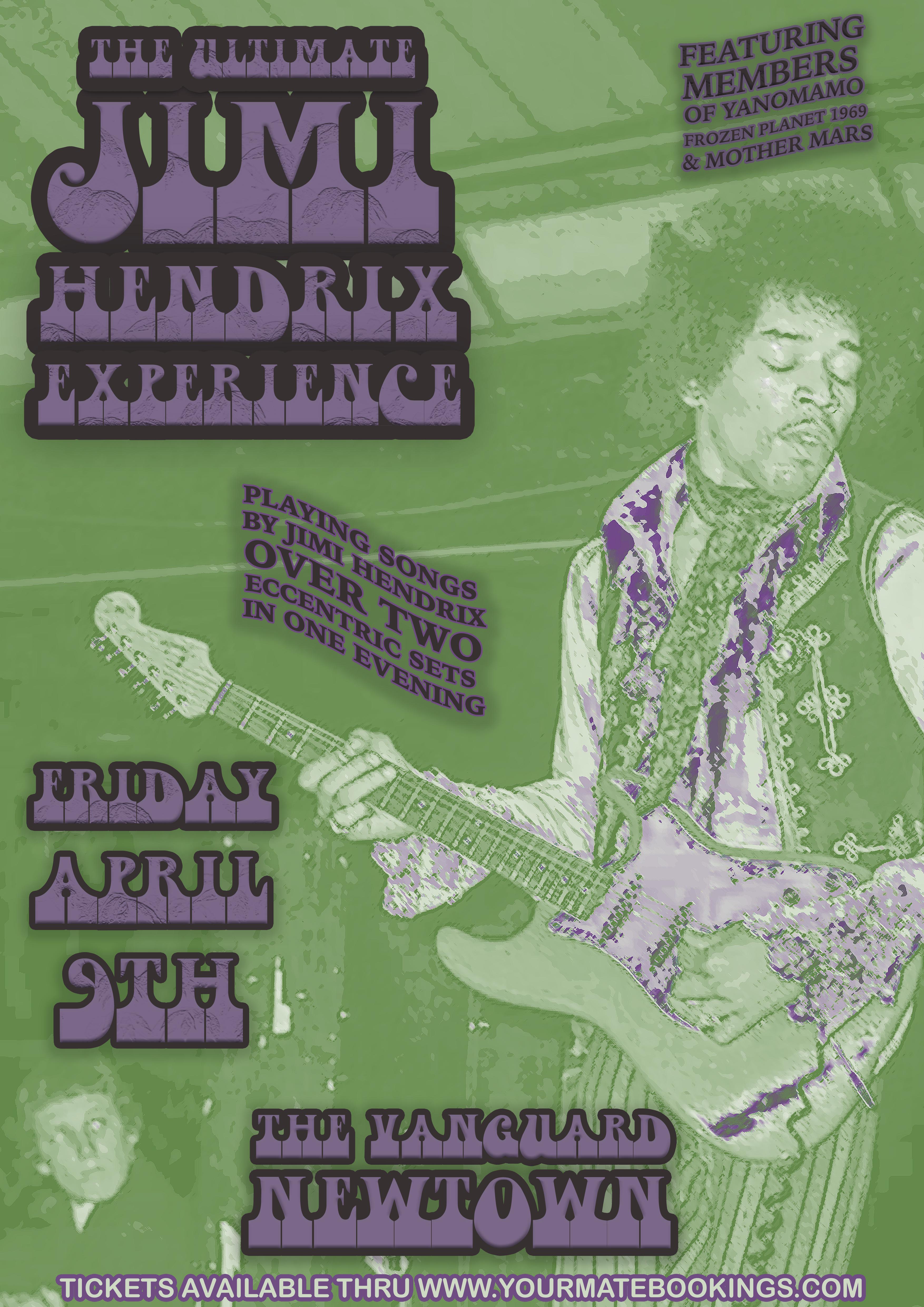 Your Mate Bookings in conjunction with The Vanguard presents “The Ultimate Jimi Hendrix Experience”!

Friday April 9th sees “The Ultimate Jimi Hendrix Experience” take the stage for two unique sessions of pulsing Psychedelic Blues Rock in tribute to the one and only “Hendrix” at The Vanguard in Newtown.

Johnny Allen Hendrix was born on November 27, 1942 in Seattle, Washington. He was later renamed James Marshall Hendrix before taking on the name the world would know him as: Jimi Hendrix. After playing as a backing musician for artists such as The Isley Brothers and Little Richard he would go on to front his own band The Jimi Hendrix Experience after a move to England in 1966 and become a pioneer in the process. An astounding amount of material was recorded between late 1966 and 1970 and many legendary performances were played. Three highly acclaimed studio albums “Are You Experienced”, “Axis: Bold As Love” and “Electric Ladyland” would be released in 1967 and 1968. There was also the live album “Band Of Gypsys” in 1970. Sadly, Jimi Hendrix left the mortal world on September 18, 1970. Many posthumous albums have since been released, such as “The Cry Of Love” in 1971. He left behind an astounding body of work, while his innovative guitar playing was revolutionary. All this, along with his high energy performances saw him become a major stepping stone along the path of rock and roll.

Now, in 2021 as we approach the 51st anniversary of Jimi’s departure from the third stone from the Sun, the fire still burns as strong as ever. Three Sydney musicians have decided to show their appreciation and gratitude for this beautiful music that was created over half-a-century ago. Introducing Matthew Slager on guitar and vocals, Paul Attard (Frozen Planet 1969 & Yanomamo) on bass guitar and Frank Attard (Frozen Planet 1969) on drums. Matthew’s guitar technique and tone pay the ultimate respect, while he simultaneously does justice to Jimi’s unique voice. Providing the guitar and vocals for Jimi Hendrix’s material is a feat not many can achieve but Matthew certainly has it all under control. Brothers Paul and Frank Attard play their part by providing the all-important rhythm section that helped make this music so great. Paul and Frank will be doing their best to ensure the work of Noel Redding, Mitch Mitchell, Billy Cox and Buddy Miles also gets the recognition it deserves. These three musicians are true fans of Jimi Hendrix and this shines through in their performance. Playing a range of hits and psychedelic jams by The Jimi Hendrix Experience and one cut by The Band Of Gypsys, Matthew, Paul and Frank are inviting anyone and everyone to share in the celebration of a truly unique musician and his classic songs.