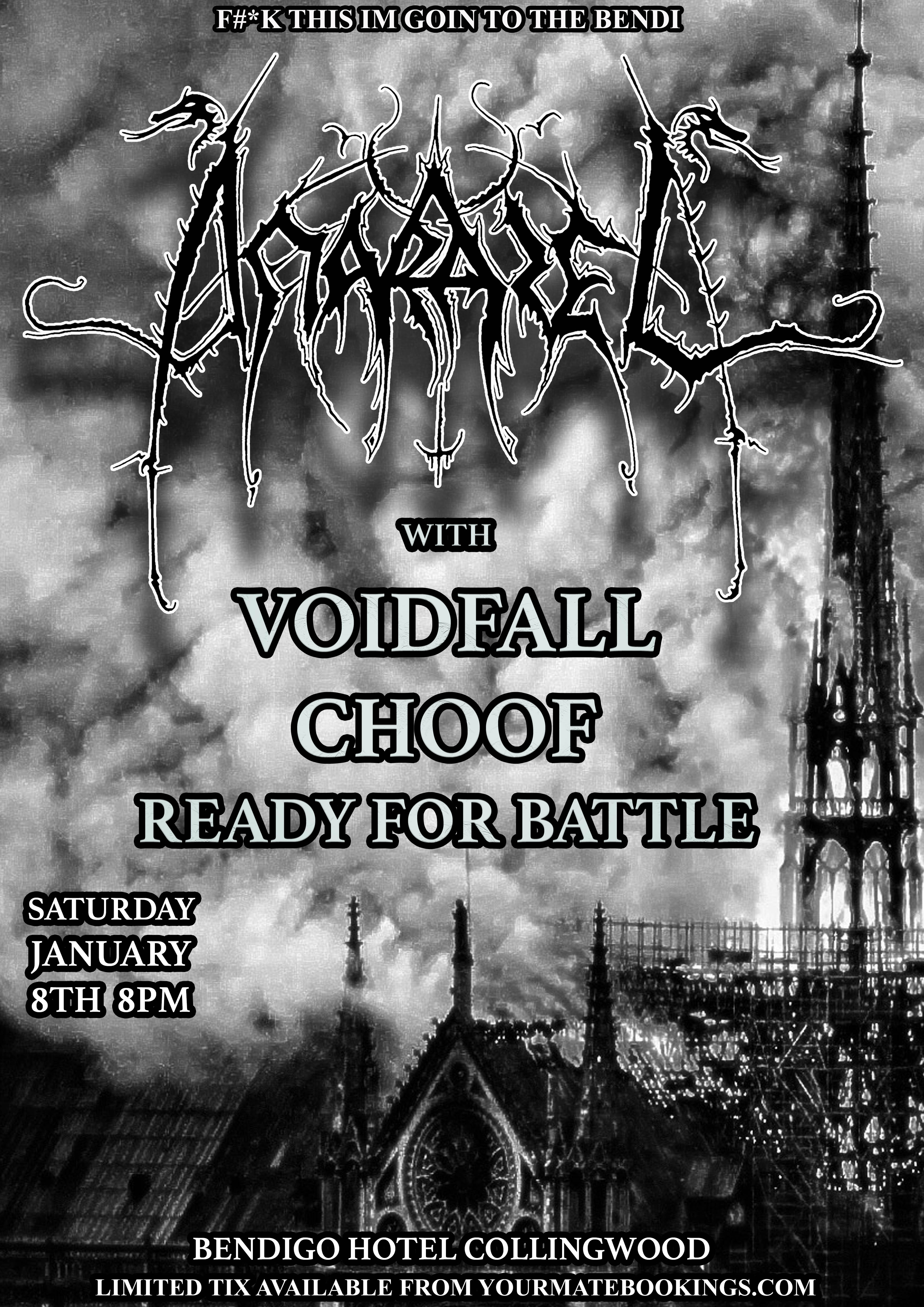 “F#*k this, I’m going to THE BENDI”
As part of the revival of live local music scene in Melbourne, Your Mate Bookings is committed to once again giving you the best entertainment in the world surrounding everything heavy.
We return to our beloved Bendigo Hotel in Collingwood to support the re-emergence of live music for the monthly gathering of “F#*k this, I’m going to THE BENDI”

For the month of January, on Saturday the 8th we are bringing the Black Metal fury of “Anarazel” back to the stage for the first time in two years!
Forming all the way back in 1996, the beast of Anarazel terrorized the Australian extreme scene for tens years and after numerous releases the band went into hibernation until recently.
Their latest offering “Iconoclastic Rebirth” is a clearly one of their greatest releases to date and with a new solid line up of players the furnace of Black Metal Hate is burning and ready to take you on a journey through the depths of the unknown crevices of the earth.
The Black Metal Force of evil will be supported by a line-up of Thrash, Death and Black metal legions including VOIDFALL, CHOOF and READY FOR BATTLE.

ANARAZEL
Anarazel were formed in 1996 and terrorised the Australian music scene for over 10 years, with a malicious onslaught of black metal brutality. After numerous releases and many notable live performances, the band went into hibernation… until now! Anarazel, led by long time members Defiler and Exhumer, has returned to tend to Satan’s unfinished business and reclaim it’s unholy throne. Boasting a new lineup, the band is faster, heavier and more chaotic than ever. The proof can be heard in Anarazel’s appropriately titled comeback release “Iconoclastic Rebirth”.
https://anarazel.bandcamp.com/
https://www.facebook.com/anarazel666

VOIDFALL
VOIDFALL are a five piece old school death metal band who’s style is heavily influenced by early 90s Swedish death metal with smatterings of English doom death metal and Scandinavian black metal throughout their opuses. Although the band was conceived in late 2015 by friends from other local bands (Catacombs, Adamus Exul, Feralian, Hellspit, Nocturnal Ashes and The Ritual Aura) , over 3 years of writing and crafting songs saw the band content to endure this process until the moment was right to unleash it upon the masses. This moment arrived on March 30th 2019, when they opened the void with their first live show.
“Death is all. Death are we!”
https://voidfall.bandcamp.com/
https://www.facebook.com/voidfall