A BROKEN SAIL and TANGENTS plus guests at MARYS UNDERGROUND 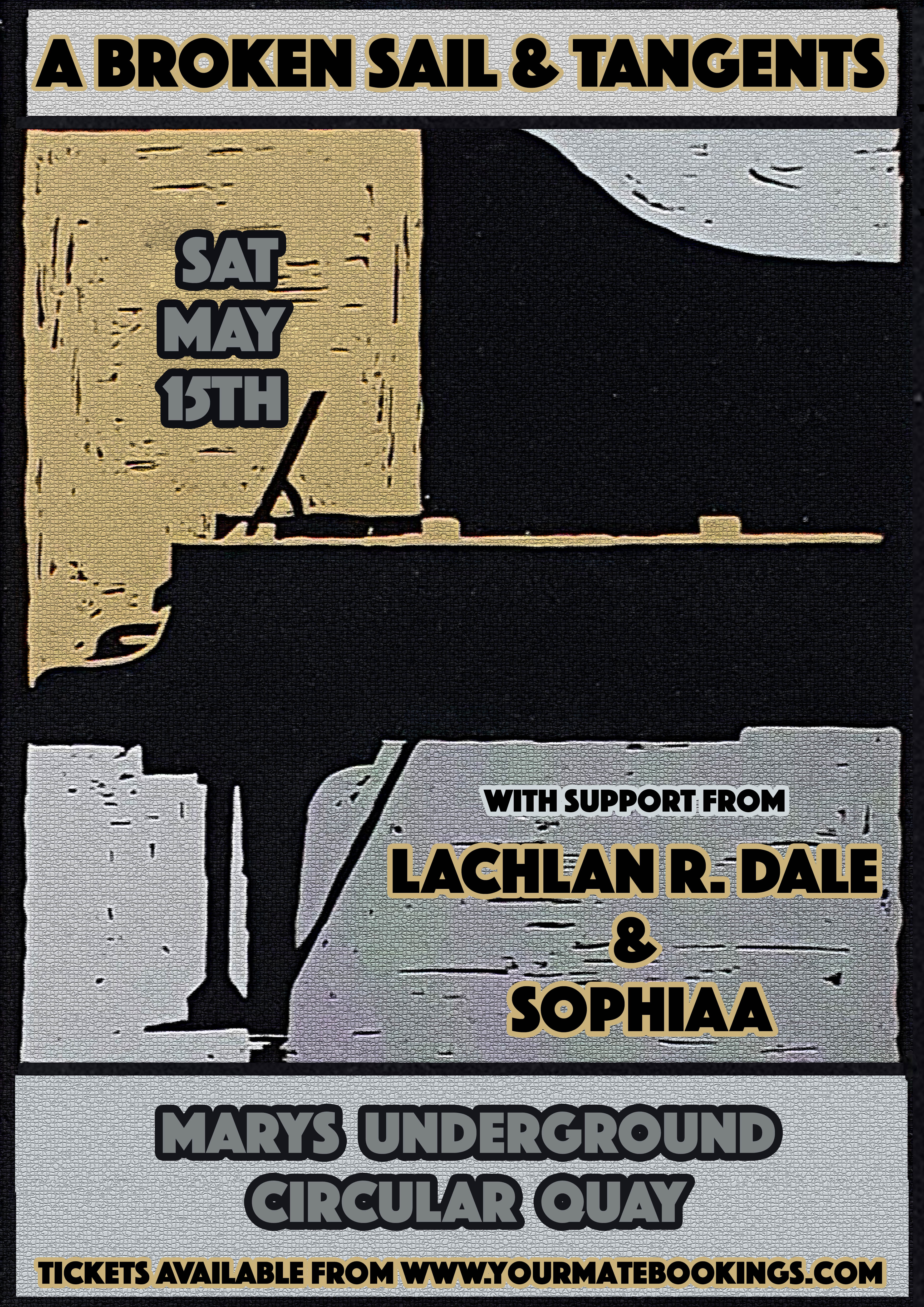 Your Mate Bookings in conjunction with Marys Underground bring you a showcase of Avant-Garde, Electronic and Cinematic Rock on Saturday May 15th!

Tangents and A Broken Sail take the stage together once again however; this time with two focussed sessions of moody notes and experimental bleakness supported by some of Sydneys finest Singer/Song Writers Lachlan R. Dale and Sophiaa in the heart of Circular Quays’ finest venue Marys Underground.

A bit about the artists performing:

TANGENTS
Formed in Sydney in 2010, Tangents released their debut album “I” in 2013, a recording of their first ever meeting and live show. Follow-up albums Stateless (2016) and New Bodies (2018), and linked singles and EPs, explored a style of post-produced live improvisation that marked out the group’s distinct blend of electronic, jazz, rock and new music-inspired styles. Amidst other international recognition, New Bodies was nominated for the Australian Music Prize in 2018.
Music and Links:
Facebook – https://www.facebook.com/TangentsSydney
Music – http://www.tangentsmusic.com/

A BROKEN SAIL
The new + 2 EP caught international praise and since the release in June 2020, and since, will be re-released on Vinyl and Cassette tape via Louisville, USA based label Somewhere Cold Records.
The Cinematic Rock multi-instrumentalist group had a co-headlined tour with US pioneering instrumental rock legend David Pajo/Papa M set for April 2020, but due to the crisis, these tours could not go ahead.
Expect moody Avante-Garde projections with maximum volume only relevant for the rhetorical “reflectionist” vibes of A BROKEN SAIL.
Music and Links:
Facebook – https://www.facebook.com/abrokensail
Music – https://abrokensail.bandcamp.com/

LACHLAN R. DALE
Lachlan R. Dale is a Sydney musician plumbing strange and unexpected sounds. Inspired by the powerful, free-flowing nature of Indian classical music – and informed by an exploration of doom, progressive metal and post-rock – his solo work envelops audiences in a swirling mass of ritual drone and psychedelia.
While traditionally a guitarist, in recent years Lachlan has explored classical and folk music from the East through the Afghan rubab, Persian setar and the Pamiri Setor. He plays a range of stringed instruments in Hashshashin – a trio who operates at the intersection between East and West, drawing on progressive rock, psychedelia, drone, post-rock and Eastern musical traditions.
Music and Links:
Facebook – https://www.facebook.com/lachlanrdale
Music – https://lachlanrdale.bandcamp.com/

SOPHIAA
Singer/Songwriter Sophiaa brings forth a new dimension of courage in a delicately crafted sound like no other.
This raspy and distinctively deep voice which belies the age of Sophiaa who attends a
renowned Sydney performing arts school by day, transcends into the night; as she lives her dreams of song-writing and entertainment for the community who yearn for progressive talent in a balanced soul.
Music and Links:
Facebook – https://www.facebook.com/Sophiaa-115092073693016
Music – https://www.instagram.com/sophiaangillettamusic/